Perlite for Hydroponics: A Hidden Treasure 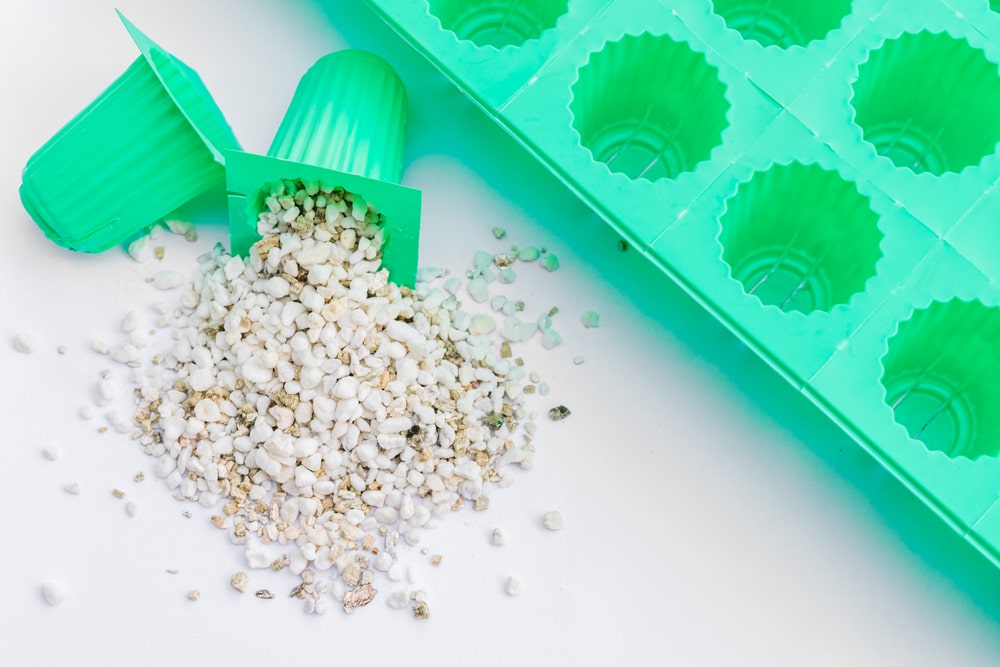 Perlite is one of the main staples when it comes to hydroponic growing mediums. It’s known for its ability to add aeration and keep root zones oxygenated. Surprisingly, perlite is made out of volcanic glass! It gets popped like popcorn to form into small porous particles that are widely used in both hydroponic and soil-based gardens.

Keep reading to learn more about this important growing medium!

Perlite is an incredibly unique growing medium that’s the perfect fix for oxygen issues and an overabundance of moisture. It’s made from volcanic glass that forms when lava encounters water. How cool!

Then the glass gets crushed up and heated at a super high temperature. This causes any excess moisture to evaporate and the glass essentially pops like popcorn. The popping creates perlite’s porous structure.

Perlite has been used in the construction world- such as in cement- for many decades. But it’s also found its way into the gardening sphere.

You’re likely familiar with perlite already, as it’s those little white particles in potting mixes! But it also has many uses in hydroponic gardens.

Advantages and Disadvantages of Perlite

Why do hydroponic growers use perlite?

Since perlite is so lightweight and holds onto air with ease due to its air pores, it’s a great addition to your system if you’re having trouble getting enough oxygen to your plant roots (aka anaerobic conditions). This will almost immediately increase plant growth.

Anaerobic conditions- a lack of oxygen- can cause anaerobic bacteria to eat your roots, which is obviously not good!

Easy On The Wallet

Perlite is one of the cheapest growing mediums out there! Part of this is because you’re typically not using large amounts of perlite at a time.

Some mediums need to be sterilized or heavily washed before they’re ready for use (such as LECA).

Because perlite isn’t made from an organic material and is heated at extremely high temperatures during the creation process, the chances of pests or diseases being present are little to none.

Perlite makes it easy on you because it’s pH neutral. Because of this, you won’t have to worry about finicking with your pH after adding it.

pH affects nutrient availability, so it’s helpful to have a growing medium that won’t change the pH of your hydroponic growing system.

Even if you had diseased plants in your system, all you need to do is rinse your perlite with a hydrogen peroxide or bleach solution and you’ll be set!

Now let’s talk about some downsides to perlite.

Doesn’t Agree With Some Root Systems

Since perlite is made up of such small particles, aggressive root systems can get blocked and cause water to pool.

Plants that are very large or that have a lot of roots may have trouble with perlite.

Perlite particles are porous, for better or for worse. The pores in perlite are what give it its famous aeration.

But on the other hand, the texture of perlite allows all sorts of gunk and debris build-up. If you don’t keep a clean system, expect your perlite to suffer and cause problems!

Perlite isn’t a renewable resource. It’s estimated that we’ve only used less than one percent of all perlite in the past half a century, but it’s still worth noting that we’re extracting something from the earth that takes centuries to form.

What Is So Great About Perlite?

The main reason people use perlite is to aerate their plants’ root zones while working towards creating the ideal environment for their plants.

Finally, let’s discuss how to actually use perlite in a hydroponic setting.

Perlite is the perfect medium for propagating plants.

The perlite encourages root development as the roots search for pockets of moisture and nutrients in the medium.

Likewise, it prevents root rot which can be a major problem during propagation if you’re not careful.

Combining With Other Mediums

While perlite can technically be used on its own, it has a tendency to float in certain systems such as ebb and flow or deep water culture.

That being said, it’s perfect to combine with heavier substrates such as coco coir or vermiculite to add some aeration to their dense structures!

You can fill a collection of buckets with perlite and connect them with tubing. Using a water pump and a reservoir, this can easily turn into a DIY hydroponic system!

Likewise, perlite is great for growing larger crops or root vegetables such as potatoes in buckets or bins.

Can You Grow Plants In Perlite?

You can grow plants in perlite on its own, but it is most typically mixed with heavier growing mediums to add some aeration.

Perlite does not increase pH because it is pH is neutral.

Is Perlite A Growing Medium?

Perlite is a well-draining medium that is used to increase aeration in both hydroponic and traditional gardens. Its porous design holds onto pockets of air to keep root zones oxygenated.

Is Perlite Toxic To Humans?

Perlite is not toxic to humans.

Subscribe to our blog so you never miss any of our guides, how-to’s, and more!

No comments to show.